Building and harnessing support for Leprosy control in Maharashtra

ALERT-INDIA is committed to developing and implementing people-centred leprosy control programs in urban and rural areas of Maharashtra since 1981, in alliance with multiple stakeholders.

ALERT-INDIA is a partner with the National Leprosy Eradication Program (NLEP) of Government of India, a commendable recognition of our significant contribution made towards building a leprosy free India. 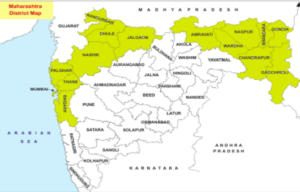 In response to the policy of the Government to integrate leprosy into public health services, ALERT-INDIA launched “Leprosy Elimination Action Programme” (LEAP) in 2005 to sustain leprosy control and strengthen the integration process.

The four-pillar approach of LEAP ensures scalable and sustainable impact 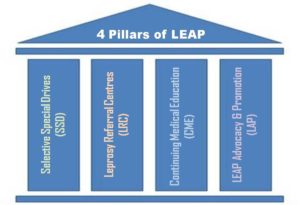 Our solution: ALERT-INDIA trained and engaged local communities as ‘volunteers’ and many civil society organizations in ‘Selective Special Drives’ for creating sustained awareness about leprosy that can change the minds of people with increased social acceptance and improved lively participation in leprosy control activities.

We reached millions of people including school children in underserved areas (rural and tribal) through SSDs for ‘timely’ detection of leprosy before the disease make an irrevocable consequence (developing disability) and guarded the community at large (spreading infection) thus impacted the disease incidence and social exclusion.

Challenge: Invalidated assumptions of ‘elimination’ have led to complacency with least priority and poor responsiveness for leprosy control by the public health system!

Our solution: We strengthened the public health system by establishing leprosy referral centres and equipped them with appropriate human and material resources to provide quality leprosy services along with periodical technical and monitoring support that enabled the fulfilment of rights and entitlements to health for the people with leprosy and related disabilities.

We facilitated access to sustained leprosy services through 149 leprosy referral centres established within the public health facilities at secondary level in 15 districts of Maharashtra.

Challenge: Retaining the leprosy expertise within the public health system for sustained leprosy control was a crucial prerequisite in the integrated setting!

Our solution: Our expert teaching faculties imparted continuing medical education to various categories of medical and healthcare personnel at all levels in the public health system on leprosy to improve their knowledge and skills with clinical acumen.

Thousands of healthcare professionals including medical doctors, nurses, physiotherapists at different healthcare institutions are oriented with technical know-how for prompt diagnosis, managing complications and leprosy disabilities with adherence to guidelines of NLEP and WHO.

Challenge: Lack of inclusive policy and discriminatory practises by the government sets an impetus for meting social injustice to people affected by leprosy!

Our solution: ALERT-INDIA builds on its experience on the ground to put together evidence for wider awareness of the disease incidence as well as the social concerns of people affected by leprosy for advocacy & promotion with the government for policy changes to guide developing protocols, allocation of adequate funds and social inclusion.

Several national workshops and consultations in coordination with the public health experts, health programme managers and other key stakeholders such as WHO, ILEP and NGOs has culminated into policy development and interventions with an inclusive approach to ensure right to health for people with leprosy in the country.

It is important to ensure that the achievements made so far in controlling leprosy are sustained, that the burden of the disease is further reduced, and that affected people continue to receive quality leprosy services as long as they are needed. At the same time, efforts to increase community awareness are required to put an end to the prejudice and discrimination still faced by the people affected by leprosy and their families. Our challenge is to ensure that all persons affected by leprosy, wherever they live, have an equal opportunity to be diagnosed and treated by competent health workers, without unnecessary delays and at an affordable cost.

In the future, ALRT-INDIA intends to harmonize LEAP with the existing operational plans of the Government and connect these activities with the NLEP in focused areas or states in India. ALERT-INDIA has drawn a road map for future plans with national and state governments, as well as other key stakeholders that will result in significant health impacts thereby achieving a leprosy free status in India by 2030!