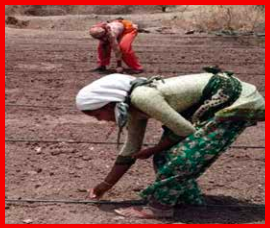 Care beyond treatment helps change lives
Donate Now
17-year-old Nikita from a Bhil tribe is part of a five-member family that earns a livelihood providing farm labour. Earlier a lively girl, she chose to remain secluded from her friends; social and family gatherings when she developed claw fingers due to leprosy. Her parents were saddened that matrimonial proposals were rejected due to her disability.

Health coordinator visits, assessment, counselling towards reconstructive surgery, and post-operative care from ALERT-INDIA team helped Nikita correct the deformity and be a part of her community.

"The surgery brought back happiness missing from our lives. We now look forward to a full life for her." say Nikita’s Parents

Alka wife of Vanshya Dikar and a mother of three children, a tribal lady resident of village Vadoli in area of PHC Sutrakar was brought to a Leprosy Referral Clinic (LRC) at Talasari Rural Hospital by one of her relatives for the complaints of swollen red skin patch in the face, with about six months history.

On thorough examination, she was diagnosed with leprosy. Smear test further indicated that her disease was non-infectious. However, it was revealed the skin patch face was in reaction phase causing disability, at an early stage, in her right eye.

ALERT-INDIA's LRC team planned a line of treatment both for treating leprosy with Multi-Drug Therapy (MB-MDT 1 year) and a special course of treatment with steroids and physiotherapy for the management of reaction and disability. Physiotherapy included treatment with electric muscle stimulation along with exercises for the affected eye. Alka complied with the medical advice and attended regularly for physiotherapy sessions at the LRC and collecting steroid medicines. She also had home-based self-care practice for eye doing regular exercises.

The result was obvious. After four months of medical care, the reaction subsided and early disability in the eye was totally recovered.  Her eye is prevented from permanent disability due to action by a caring relative and effective treatment and management at LRC and none the less, understanding about the disease & cooperation by Alka herself in complying with the medical advice.

However, Alka is continuing the last course of treatment for reaction along with medication for leprosy, MB-MDT a one year course. 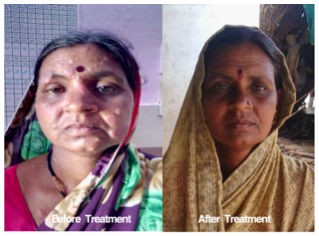 A Journey from Witchcraft to Modern Treatment in Leprosy
Donate Now

Mrs. Dwarkabai Rohidas Bhil, 45 yrs tribal lady, is a classic case of a victim of age-old myths and misconceptions about health care, especially leprosy. She stays with her husband and family of her daughter at village Bhilati Naigaon in Muktai Nagar block of Jalgaon district.

An ASHA who was trained under ALERT-INDIA's MH-POID training activities rightly suspected Dwarakabai for leprosy. ASHA learnt that Dwarakabai, when she had seen initial signs of disease (patches/nodules on body), had approached to a local faith healer. She was in the belief that the treatment would cure her skin problem. But it did not happen. In the meanwhile her condition deteriorated, the disease progressed and she developed skin patches all over the body.

ASHA advised her to report to the nearest Primary Health Center at Anturli for examination and treatment which Dwarakabai declined. So ASHA informed her immediate supervisor and the local Sarpanch to intervene. But Dwarkabai was adamant on her decision. Lastly, the supervisor informed the block coordinator of the project and National Leprosy Eradication Programme (NLEP) staff and requested them to counsel Dwarkabai so she can take proper treatment. The block coordinator and the NLEP staff met local Sarpanch and Dwarkabai’s family and informed them scientific and medical details about the disease and treatment along with the adverse effect of negligence to medical care. It was revealed that Dwarkabai was also suffering from severe Type-I reaction.

The family and Sarpanch were informed that the disease may turn to infectious type and would be a cause for a spread in the community if there is further delay in treatment.  This caption line helped her family and Sarpanch to realise the severity of the problem. Immediately next day Dwarkabai was brought to the Leprosy Referral Center at Muktai Nagar. Dwarkabai was thoroughly examined and started with MDT along with treatment with special medication, steroids, for Type-I reaction which has potential for nerve damage leading to disability.

As steroid treatment showed clinical regression in a short time, Dwarkabai too, understood the importance and efficacy of modern medicine. She completed a full course of reaction treatment in MDT.

However, she was regularly followed up to see the progress of the disease. Her skin patches disappeared. Disease well arrested and there was no recurrence of reaction later. She is free from the risk of disability due to effective intervention.